Context: The Information Fusion Centre – Indian Ocean Region (IFCIOR) which was set up in 2018 has started functioning as an information sharing hub of maritime data and “cuing incident responses” to maritime security situations through a collaborative approach.

The major centres with which regular exchange of maritime security information is being undertaken include:

About IFC-IOR The Indian Navy’s Information Fusion Centre-Indian Ocean Region (IFC-IOR) is a single-point centre that links all coastal radar chain network along the 7,500 km Indian coastline and in some neighbouring countries. The major vision of IFC-IOR is strengthening maritime security in the region and beyond, by building a common coherent maritime situation picture and acting as a maritime information hub for the region. It has been established at the Navy’s Information Management and Analysis Centre (IMAC) in Gurugram. With the help of this Centre, information on “white shipping”, or commercial shipping, will be exchanged with countries in the region to improve maritime domain awareness in the Indian Ocean. Significance of IFC-IOR

How is Indian Ocean Important?

Context: According to ISRO, an instrument on Chandrayaan 2, CLASS, which was designed to detect the signatures of elements in the Moon’s soil, had detected charged particles during the mission.

This is a phenomenon, that took place during the orbiter’s passage through the ‘geotail’. What is a geotail? It is a region in space which exists as a result of the interactions between the SUN and EARTH and allows the best observations. In every 29 days, the Moon traverses the geotail for about 6 days. Now, when Chandrayaan 2, which is orbiting the Moon, crosses the geotail, its instruments will be able to study the properties of the geotail. How Geotail is formed? We all know that the Sun emits solar winds which is a continuous flow of charged particle which are embedded in the extended magnetic field of the Sun. Due to its magnetic field, Earth obstructs the solar wind plasma which results in the formation of the magnetic envelope around Earth. On the Sun-facing side of the Earth, the envelope is compressed into a region that is approximately three to four times the radius of the Earth while on the opposite side, the envelope is stretched into a long tail, which extends beyond the orbit of the Moon. It is this tail which we call as the GEOTAIL.

Context: Section 144 of Criminal Procedure Code has been imposed by Mumbai Police in Aarey Colony following strong protests by activists against the felling of trees in the garden zone for a Metro car shed. 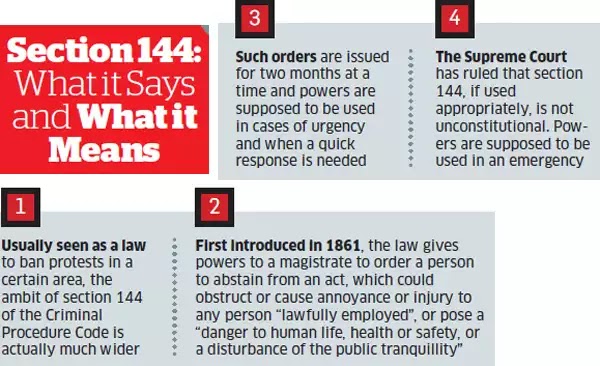 About Section 144 CrPC  Under this section of CrPC of 1973, public gathering is strictly prohibited. This section authorises the Executive Magistrate of any state or territory to issue an order to prohibit the assembly of 4 or more people in any area. As per the provisions of the law, every member of such ‘unlawful assembly’ can be booked for engaging in rioting. When it is imposed? It is imposed in urgent cases of nuisance or apprehended danger of some event that has the potential to cause trouble or damage to human life or property. It also restricts carrying any source of weapon in that area where it has been imposed and people can be detained for violating it. The maximum punishment for such an act is 3 years. No order under this Section of CrPC shall remain in force for more than 2 months but the state government can extend the validity for 2 months and maximum up to 6 months. It can be withdrawn at any point of time if situation becomes normal. Officer Raj-Ratna E.F. Deboo IPS was the designer and architect of section 144 in 1861.

Context: A detailed framework has been adopted by the Telangana government in order to use drones for the last-mile delivery of essential medical supplies such as blood and medical samples.

The framework has been adopted in an effort to increase the access to the healthcare to diverse communities across the states. About the Framework This comprehensive framework has been co-designed by the World Economic Forum (WEF) and the Apollo Hospital Group Healthnet Global Limited. It is a part of the ‘Medicines from the Sky’ initiative of World Economic Forum with the help of which an effort is made to develop source material for policymakers and health systems to analyse the challenges that come with drone delivery, and to compare this model with other competing delivery models. How will it be beneficial? The major advantage of the use of drones in last mile delivery of medical supplies is the reduction of the time taken to transport material, and hence an overall improvement in the supply chain efficiency. Talking on a global front, Rwanda is the country where drone-related pilot projects have been implemented on a national scale that delivers medical supplies without delay and at scheduled intervals.

Context: Following a push from the Centre, Punjab-Food and Civil Supplies Department has instructed all the government agencies to link the bank accounts of farmers with the PFMS portal. About Public Finance Management System (PFMS) Portal It is an online platform which developed and implemented by the office of Controller General of Accounts (CGA) under the Finance Ministry. It is used to make direct payment to beneficiaries of government schemes. PFMS was initially started as a Plan scheme named CPSMS of the Planning Commission in 2008-09 as a pilot in four States of Madhya Pradesh, Bihar, Punjab and Mizoram for four Flagship schemes e.g. MGNREGS, NRHM, SSA and PMGSY.  The scheme was included in 12th Plan initiative of Planning Commission and Ministry of Finance.

It is being compelled in order to monitor the accounts of farmers to ensure that they get the payment of their crops from the Arhatiyas, who pay farmers only after selling their produce and receiving the money from the buyers. Who are Arhatiyas? These are the Commission agents which remains powerful in the rural areas of Punjab. Each of these agents has between 20 to 200 farmers, whose crops they sell. These are also moneylenders who fund the requirement of farmers for cash for cropping operations as well as personal and social requirements. Why Arhatiyas are against this move? The recent decision has angered the arhatiyas due to the fear that the linking of accounts of farmers to the PFMS database is only one step short of the government deciding to make payments directly to the farmers, cutting the agents all together. While the government is pushing towards the underlining the need of bringing transparency into the system, the arhatiyas are worried about the process of monitoring.

Multidisciplinary drifting Observatory for the Study of Arctic Climate

The mission of the Expedition is to study the impact of Climate Change on the Arctic and to figure out as to how it could affect the rest of the world. Under the proposed mission, the German Research vessel Polarstern has been anchored on a large sheet of ice in the Central Arctic. As part of their plan, they will allow the water to freeze around them, effectively trapping themselves in the vast sheet of ice that forms over the North Pole each winter. Then they will build temporary winter research camps on ice, allowing them to perform tests that wouldn’t be possible at other times of the year or by satellite sensing. The participants in this mission includes Alfred Wegener Institute in Germany along with scientist from 17 nations. The funding for the mission has been received from U.S. institutions such as the National Science Foundation, the Department of Energy, the National Oceanic and Atmospheric Administration, and NASA.

National e-Assessment Centre has been recently inaugurated at New Delhi by the Finance Minister. With this the Income Tax department is introducing a faceless e-assessment to import greater efficiency, transparency and accountability in the assessment process. With the help of this centre, there would be no physical interface between taxpayers and tax officers. This is another effort by the Central Board of Direct Taxes in order to ease the compliance for the taxpayers. Under this new system, taxpayers have received notices on their registered emails as well as on accounts on the web portal, with real-time by way of SMS on their registered mobile numbers, with a clear specification of the issue for which their account has been scrutinized.

Marth Mariam Thresia (1876-1926) was an Indian Syro-Malabar Catholic professed religious and the founder of the Congregation of the Holy Family. She is known for receiving frequent visions and ecstasies as well as even receiving the stigma which she kept well guarded. She had been involved in apostolic work all her life.

She is to be canonized on 13th October 2019 which is an act by which a Christian Church declares that a person who has died was a saint, upon which the person is included in the list of recognized saints, called the ‘canon’.

A new theory has been proposed by two physicists that states that the Planet Nine might be a primordial black hole. To add to your knowledge, Planet Nine is a hypothetical planet which is located in the Outer region of the Solar System and as of 2019 there has been no observation made regarding this hypothetical Planet Nine. It is interesting to know that its gravitational effects could explain the unusual clustering of orbits for a group of extreme trans-Neputonian objects (eTNOs), which are the bodies beyond Neptune that orbit the Sun at distances averaging more than 250 times that of the Earth.

A primordial Black hole with which the hypothetical planet nine has been compared to is one that is believed to have formed immediately after the creation of the universe. Just like Planet Nine, Primordial black holes too have been predicted to exists but nothing so far has been spotted. Over the couple of years, scientists have sought to explain several puzzling aspects of the Solar System by attributing these to the influence of the Planet Nine. For instance, in a 2016 paper, researchers argued for the existence of Planet Nine by saying that it could be responsible for the peculiar alignment of icy objects on the outskirts of the Solar System.

The 39th Edition of World Congress of Poets was held from 2nd to 5th of October 2019 at the Kalinga Institute of Industrial Technology and Kalinga Institute of Social Sciences (KIIT & KISS) in Bhubaneswar, Odisha. The Congress was held in three different languages i.e., English, Spanish and Chinese. Theme 2019: ‘Compassion through Poetry’ Eligibility: The poet should have minimum of one book published with an ISBN and should have a recommendation letter from a poetry society that is legally established and has a legal existence. It was in 1969 that the World Congress of Poets (WCP) was founded by Amado M. Yuzon, Krishna Srinivas, Lou Lutour and Tin-Wen Chung and held for the first time in Manila in 1969.