Context: E-portal of CCRT known as ‘Digital Bharat Digital Sanskriti’  has been launched by the Union Minister of State for Culture & Tourism (IC).

This portal will enable dissemination of cultural education through digital interactive medium into the classrooms all over the country.

For this initiative, CCRT has tied up with Routes 2 Roots, an NGO, for connecting seamlessly all the CCRT Regional Centres i.e., Guwahati, Udaipur and Hyderabad.

Apart from the online portal, a film ‘Rahas’ directed by Sunil Shukla was also released. Rahas is basically Raaslila of Chhattisgarh. Subsequently he released a book “Dewas ki Sanskritik Parampara” written by Shri Jeewan Singh Thakur. About CCRT CCRT, short for The Centre for Cultural Resources and Training (CCRT) is one of the premier institutions that is putting up efforts in the field of linking education with culture. It was established in 1979, pioneered by Smt. Kamaladevi Chattopadhyay and Dr. Kapila Vatsyayan, and functions as an autonomous organization under the aegis of Ministry of Culture, Government of India. CCRT’s main objective is to make variety of training programmes for in-service teachers, teacher educators, educational administrators and students throughout the country. Further, it also organizes special training programmes for the physically and mentally challenged children. The CCRT has its headquarters in New Delhi and three Regional Centres at Udaipur in the west, Hyderabad in the south and Guwahati in the north-east to facilitate the widespread dissemination of Indian art and culture. The CCRT also implements some other important policies of the Ministry of Culture, e.g., awarding Scholarship to Young Artiste, Junior and Senior Fellowships focusing on “in-depth study/ research” in various facets of culture, these include New Emerging Areas of Cultural Studies.

Context: The members of US India Strategic Partnership Forum (USISPF) have planned to meet at New Delhi. What is it? The US-India Strategic Partnership Forum (USISPF) is a non-profit organization established in 2017, with the primary objective of strengthening the India-US bilateral and strategic partnership through policy advocacy in the fields of economic growth, entrepreneurship, employment-creation, and innovation. USISPF plays a significant role in promotion of a robust and dynamic relationship between the two countries through policy advocacy leading to driving economic growth, entrepreneurship, employment-creation, and innovation to create a more inclusive society. What does it do? This US-India Strategic Partnership Forum (USISPF) is highly committed towards creating the most powerful strategic partnership between the U.S. and India. One of the most important part of this Forum is to promote bilateral trade. According to USISPF estimates India-US bilateral trade is projected to grow to USD 238 billon by 2025.  The Six major pillars of USISPF includes:

Context: The 15th Finance Commission has met with the representatives of the Trade and Industry bodies in Uttar Pradesh. Key Highlights Uttar Pradesh was placed amongst the high achieving states in the country securing the 12th position in the 2017 evaluation and has jumped two positions from 14 in 2016. As per the Ease of Doing Business rankings, the State has been labelled as an “Achiever State” with a combined score of 92.8% in the score as calculated by Department of Industrial Policy and Promotion(DIPP), Ministry of Commerce & Industry, Government of India which consisted of scores from the reform implementation score and feedback score. Tourism (pilgrimage) is vital sector for the State and economy of the State is based on sectors like tourism, handloom, handicraft, educational, hospitality, etc. According to the Tourism Statistics of 2018, the State ranks 3rd amongst all Indian States in attracting foreign tourists visits in the country (2017) and 13.2% of all foreign tourist visits were attracted by the State. The State ranks 2nd amongst all Indian States in attracting domestic tourists visits in the country in 2017 and 14.2% of all domestic tourist visits were attracted by the State. What are the key challenges put forward?

A number of flagship programmes of MNRE such as KUSUM, have provisions for mandatory use of domestically manufactured solar PV cells. However, it was seen that some manufacturers have been importing semi – processed solar PV cells (generally called blue wafer) and making final Solar PV cells with little value addition in India.

The orders issued by MNRE w.r.t solar PV are : This is in reference to the schemes/ programmes being implemented by the Ministry of New & Renewable Energy, wherein it is mandatory to use domestically manufactured solar PV cells and domestically manufactured solar PV modules, and also in reference to the Manufacturing-Linked-PPA initiative by Solar Energy Corporation of India Ltd (SECI).

On an estimate, almost 90% of the world’s PV technologies, today, are based on some variation of silicon. In 2011, about 95% of all shipments by U.S. manufacturers to the residential sector were crystalline silicon solar panels.

Context: The Defence Acquisition Council (DAC), chaired by Raksha Mantri Shri Rajnath Singh, has accorded its approval for 3 projects to be indigenously designed, developed and manufactured by the Indian industry. Key Highlights The first two of the three projects include third generation Anti-Tank Guided Missiles (ATGM) and the Auxiliary Power Units (APUs) for the T-72 and T-90 Tanks. The 3rd generation ATGM would enable ‘Fire and Forget’ and “Top Attack” capabilities to the troops in an armoured battle. Further, the APUs would allow the incorporation of various upgrades to Fire Control System and Night Fighting capabilities of the Tanks. Both of these projects are planned to be progressed under the ‘Make-II’ Category and will provide a major boost to indigenous research and development in the Private Sector. In addition to this, for the first time, the Ministry of Defence has offered complex Military equipment to be designed, developed and manufactured by the Indian private industry. What are third generation projects? The 3rd indigenous project pertains to discrete Electronic Warfare (EW) systems specifically for the mountain and High Altitude terrain. The Project would be designed and developed by DRDO and manufactured by design cum production partner from the Indian industry. About Defence Acquisition Council It was in 2001 when the Government of India decided to set up an integrated Defence Acquisition Council (DAC) in order to counter corruption and speed up decision- making in military procurement. The DAC is headed by the Defence Minister and is responsible to give policy guidelines to acquisitions, based on long-term procurement plans.It also clears all acquisitions, which includes both imported and those produced indigenously or under a foreign license. The major objective of the Defence Acquisition Council is to ensure expeditious procurement of the approved requirements of the Armed Forces in terms of capabilities sought, and time frame prescribed, by optimally utilizing the allocated budgetary resources. The key Functions of the DAC includes:

The rankings are released by The QS (Quacquarelli Symonds) and Times Higher Education (THE), both of which are based in London. The rankings include public, private, higher education or deemed universities. How institutions are ranked in QS India rankings and how is it different from the QS World University Rankings? The main methodology that has been used to rank the institutes in India involves 8 indicators. These were:

These India rankings are different from that of the QS World University Rankings that were released earlier this year. In that list, IIT-Bombay was ranked the best Indian institution and IIT-Delhi as the second best. The major difference occur in different criteria used by two rankings — for example, while academic reputation is given a weight of 30% in the India University Rankings, its weight is 40% in the World Rankings. Key Highlights of the ranking

The list has been dominated by the Indian Institutes of Technology (IITs), with 7 IITs figuring in the top 10 rankings.

IIT-Delhi has now been ranked 3rd in the listing.

Delhi University, University of Hyderabad and the Indian Institute of Science are the only other non-IIT institutions who are featured in the top ten.

A skin-on interface mimicking the appearance of human skin and its ability to sense has been developed by the researchers from the  University of Bristol in partnership with Telecomm ParisTech and the Sorbonne University in France.

This is the for the first time that the uses of “realistic” artificial skins are being considered for augmenting devices. 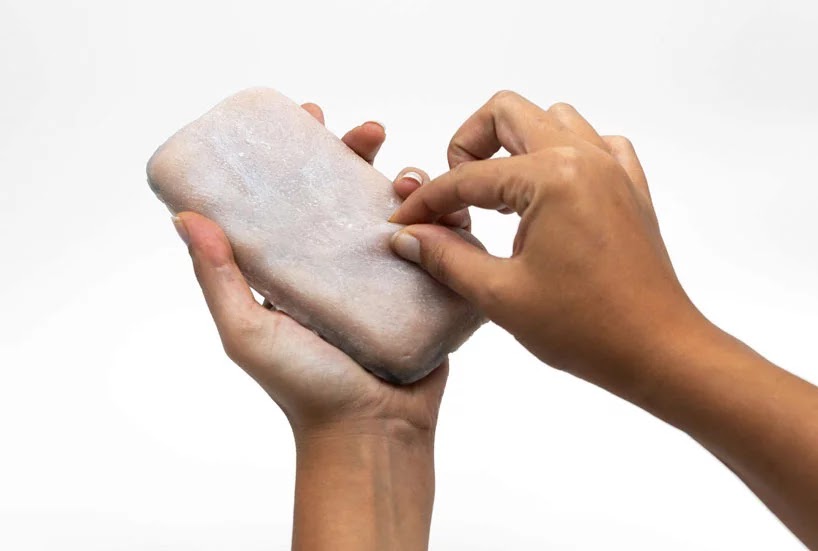 The skin-on interface is made up of layers of silicone membrane which gives it a more natural touch than the hard casing of phones, and also an ability to detect gestures made by end-users. This interface has an artificial skin which allows the device it is on to “feel” the user’s grasp, including its pressure and location. Hence, it has an ability to detect interactions such as tickling, caressing, twisting and pinching.

The oldest known natural pearl in the world has been discovered by Abu Dhabi archaeologists working at a Neolithic site on Marawah Island, which is just off the coast of Abu Dhabi. The pearl so discovered has been dubbed as the ‘Abu Dhabi Pearl’ and it was found in layers that have been radiocarbon dated to 5,800-5,600 BCE, during the Neolithic period. Talking about the Island, Marawah is a low-lying island which is located off the coast of Emirate of Abu Dhabi, the United Arab Emirates and is a key center of archaeology.  The island holds key archaeological importance as a number of sites dating from the Neolithic to the Islamic Period (12-13 AD) has been discovered here. In 2004, the Abu Dhabi Islands Archaeological Survey (ADIAS) discovered the oldest human skeleton ever found in the region amid the remains of Neolithic buildings and over 200 flint tools. Further, the DNA was extracted from teeth that were recovered from the site, and it was determined that the remains were about 7,500 years old.

Popularly remembered for the Battle of Singhagad that took place in the year 1670, he was a Maratha military leader and a close aide of Chhatrapati Shivaji.

In 1665, the Treaty of Purandar was signed between Jai Singh and Shivaji, which required the Maratha ruler to give up Fort Kandhana (later named Singhagad) to the Mughals.

Later, Taanaji was entrusted with a task of reconquering the fort Kondhana at any cost by the Shivaji. In the battle, Taanaji fought against Udaybhan Rathore, who was a formidable Rajput warrior, and the in charge of Fort Kandhana by Jai Singh.

According to legend, Shivaji, upon hearing the news of Tanaji’s demise during the battle, said ‘Gad ala pan Sinha gela’ (Although the fort was captured, a lion was lost). The fort was renamed as Singhagad (lion’s fort) by Shivaji to honour Tanaji.