About Livestock Census The Livestock Census has been conducted in the country periodically since 1919-20 and it covers all domesticated animals and its headcounts. Till date, 19 such censuses have been conducted in participation with State Governments and UT Administrations. In the present (20th Livestock Census) which was conducted in participation with all States and Union Territories, the enumeration was done both in rural and urban areas. Varying species of animals (Cattle, Buffalo, Mithun, Yak, Sheep, Goat, Pig, Horse, Pony, Mule, Donkey Camel, Dog, Rabbit and Elephant) and poultry birds (Fowl, Duck, Emu, Turkeys, Quail and other poultry birds) possessed by different households, household enterprises/non-household enterprises and institutions have been counted at their site. Collection of data through tablets computers is the major thrust given to 20th Livestock Census and this census has proved to be a unique attempt to digitise household level data through online transmission from the field. A mobile application has been developed by the National Informatics Centre (NIC) which was used for data collection as well as online transmission of data from the field to the NIC server. Key Findings of the Census

Context: Union Minister of Tribal Affairs launched the “Van Dhan Internship Programme” organised by TRIFED under Ministry of Tribal Affairs. The interns under the Programme who are now part of  “National Building Team” will help the tribal population to become self-reliant and entrepreneurs.

A total of 18 interns which will be known as the Minister’s interns and belonging from some of the reputed Institutes of Rural Management/ Management Institutions/ Institutes of Social Work/ Social Services of the country are  participating in the Programme. The internship period of internship is 6 months which may be extended depending upon the need of the organisation and mutual sustainability. What is their work? These interns under the Programme, are going to work with the team of TRIFED in various states and districts in tribal areas in development of tribal welfare and inclusive growth. These interns will support the TRIFED activities on livelihood promotion, value addition of NTFTs, marketing and credit linkages and will develop tools and techniques on institutional development including mechanism for determination of a just price or producer price of Minor Forset Products.  About TRIFED TRIFED, short for Tribal Cooperative Marketing Development Federation of India is a national-level apex organization which came into existence in 1987 and functions under the administrative control of Ministry of Tribal Affairs, Govt. of India. TRIFED has its registered and Head Office located in New Delhi and has a network of 13 Regional Offices which are located at various places in the country.

Context: The 48th edition of the Indian Handicrafts and Gifts Fair (IHGF) was recently inaugurated at the India Expo Centre & Mart at Greater Noida.

In this edition of the Fair, overseas buyers from approx. 110 countries are in India to source home, lifestyle, fashion, furniture and textiles products from around 3200 Indian exhibitors. Key Highlights A number of efforts are being made by Export Promotion Council for Handicrafts (EPCH) for sustainable development and preservation of environment by focusing on 3Rs (reduce, reuse and recycle) at this edition of the Fair. It is noteworthy to mention that around 50 tonnes waste material like plastic, metal, wood and fabric are being reused to enhance and decorate IHGF-Delhi Fair 2019. Further, a 3 MW roof top solar energy panel has been installed in the Fair in order to minimise carbon emissions. About  Export Promotion Council for Handicrafts (EPCH)  Export Promotion Council for Handicrafts (EPCH) was established under Companies Act in the year 1986-87 and is a non-profit organisation, with an object to promote, support, protect, maintain and increase the export of handicrafts. It is a nodal agency that project India’s image abroad as a reliable supplier of high quality handicrafts goods and services. It has set up Handicrafts Carpet Sector Skill Council which has set up the initiative VRIKSH, (the Indian Timber Legality Assessment and Verification Scheme), in order to establish the chain of custody and legality of the wood which has further been mapped with the UN Sustainable Development Goals. The VRIKSH initiative of EPCH ensures, encourages and supports sustainable development and encourages women entrepreneurs.

Context: Services Exports Promotion Council (SEPC), set-up by the Ministry of Commerce & Industry, has brought out the India Intellectual Property (IP) Guide at Cannes in MIPCOM 2019, being held from 14-17, October 2019, for the Media and Entertainment (M&E) industry. This comprehensive guide features a catalogue of over 60 Indian IPs, which are popular in more than 160 countries. It comprehensively breaks the narrative of only low-end work being done in India. One of the key objectives at SEPC is to facilitate service exporters of India and handhold medium and small enterprises to expand their global footprint and to present IPs from India to the buyers and distributors from across the globe. The IP Guide is to illustrate strengths of the Indian content creators. Importance of IP: Intellectual Property (IP), especially in the today’s innovation economy is critical to a large number of SEPC’s stakeholders and it is believed that the creation, protection and expansion of IP products alone will bring huge benefits to the sector. About SEPC SEPC is an Export Promotion Council which is set up by Ministry of Commerce & Industry, Government of India in 2006 and is instrumental as an apex trade body for facilitating service exporters of India. Functioning as an advisory body, it actively contributes to the formulation of policies of Government of India and acts as an interface between the Services Industry and the Government. SEPC has been vital source of promotion of the efforts of Indian service exporting community, and to project India’s image abroad as a reliable supplier of high quality services. It organizes a large number of promotional activities such as:

Context: The 14th edition of annual publication of Global Hunger Index, a report which measures hunger in 117 countries around the world has been released. The report has been jointly released by Concern Worldwide and Welthungerhilfe. Key Highlights of the 2019 Report Comprehensively, the number of hungry people has risen from 785 million in 2015 to 822 million. Multiple countries have higher hunger levels now as compared to that in 2010. 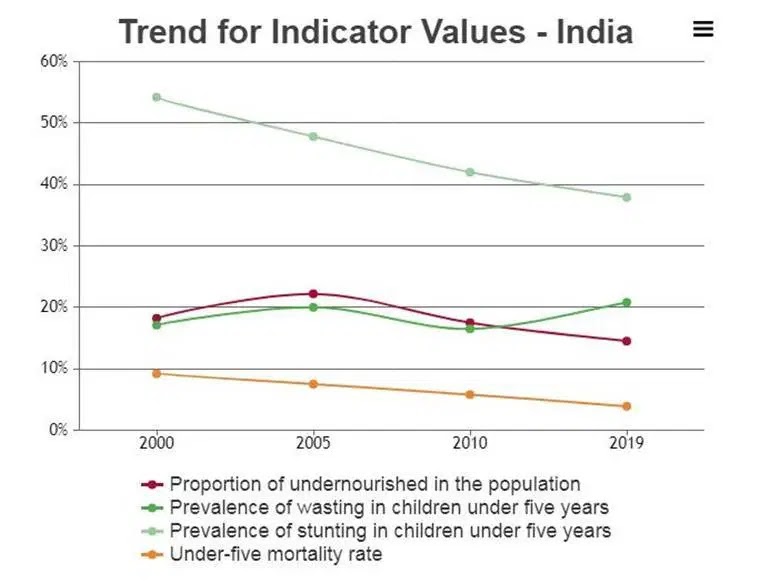 At the regional level, South Asia and Africa South of the Sahara have the highest 2019 GHI scores in the world, at 29.3 and 28.4, respectively. In case of Eastern Europe and the Commonwealth of Independent States, Latin America and the Caribbean, East and Southeast Asia, and the Near East and North Africa range from 6.6 to 13.3, indicating low or moderate hunger levels. The four countries with alarming levels of hunger are Chad, Madagascar, Yemen, and Zambia. Following data came to light when countries are compared on the basis of the indicators used to find the GHI Scores:

India Specific India is ranked 102nd among the 117 countries  in the 2019 Index. India was pegged at 103 in 2018 but then 119 countries were mapped. India falls in the “serious” category with an overall score of 30.3. Further, India has the highest percentage of children who suffer from acute undernutrition. On other parameters, where India has improved, the pace has been relatively slow. Among its  BRICS counterparts, India is ranked the worst, with China at 25 and a score of just 6.5. India is behind every other country within South Asia too.  For example, Sri Lanka, Nepal, Bangladesh and Pakistan (in that order) are all ahead of India. What is Global Hunger Index? It is basically a tool which is designed to comprehensively measure and track hunger at global, regional, and national levels. Every year, GHI scores are calculated to assess progress and setbacks in combating hunger. The GHI scores are based on a formula that captures 3 dimensions of hunger i.e., insufficient caloric intake, child undernutrition, and child mortality, by using 4 component indicators:

The data on these indicators is collected from the following sources:

How GHI ranks countries? Each country’s data are standardised on a 100-point scale and a final score is calculated after giving 33.33% weight each to components 1 and 4, and giving 16.66% weight each to components 2 and 3. On this 100-point-sclae of GHI, 0 being the best score (no hunger) and 100 being the worst, although neither of these extremes is reached in actuality. Further it could be understood as follows:

The Culture Department of Uttar Pradesh government in  collaboration with Thailand government is going to organise the India’s first training and performance programme of world famous KHON Ramlila. Basically, Khon Ramlila is a masked form of Ramlila art of Thailand.  It is a form of masked dance that depicts the scenes of Ramlila. It has no dialogues, with background voices narrating the whole story of Ramayana. It is also known worldwide for its beautiful attire and golden masks. It is included in the list of Intangible cultural heritage list of UNESCO. It is to be noted that “The Ramakien” (literally ‘Glory of Rama’) is national epic of Thailand which is derived from the Hindu epic Ramayana.

Following the uproar over the outcome of the men’s World Cup final this year when England were declared winners against New Zealand on boundary count, the International Cricket Council (ICC) has changed the super over rule for all its major events. According to the new rule, in case of a super over tie there will be a repeated super over until one team has more runs than the other. In case of group stages, if the Super Over is tied, the match will be tied. But in semifinals and finals, the Super Over will be repeated until one team has more runs than the other.