According to an Official release, the titled Bonding Regions and Imagining Cultural Synergies will be hosted by National Gallery of Modern Arts of India under the auspices of the BRICS Alliance of Museums and Art Galleries during November-December, 2019. About BRICS BRICS, is short for association of five major emerging national economies: Brazil, Russia, India, China and South Africa. Before the induction of South Africa in 2010, the first four were originally grouped as “BRIC” (or “the BRICs“), Since 2009, there has been annual formal meeting of BRICS nations in form of BRICS summits. China was the host of the 9th BRICS summit in Xiamen on September 2017 while South Africa hosted the latest 10th BRICS summit on 08 January 2018. These five BRICS countries represent over 3.1 billion people, or about 41% of the world population as of 2015. Further, these five nations have a combined nominal GDP of US$18.6 trillion, which is about 23.2% of the gross world product, combined GDP (PPP) of around US$40.55 trillion (32% of World’s GDP PPP) and an estimated US$4.46 trillion in combined foreign reserves, as of 2018.

These agreements are signed as a part of the Vice-Presidents visit to African Nations of Comoros and Sierra Leone and this is the first ever visit of an Indian Vice President to Sierra Leone. Key Highlights of the Agreement

Trade Relations India and Sierra Leone share a bilateral trade of US$124.58 million in 2013-14. As per the record, India was the among the top 5 exporters to Sierra Leone in 2012, and exported $100.99 million worth of goods to the country in 2013-14. Bilateral trade stood at $82.99 million in 2014-15 and $107.73 million in 2015-16. The main commodities that are exported by India to Sierra Leone includes drugs and pharmaceuticals, textiles, eggs, and machine tools while the major commodities imported by India from Sierra Leone are ferrous waste and scrap, wood pulp, waste paper and small quantities of titanium ores. On an estimate, about 60 Indian NRI/PIO companies are based in Sierra Leone as of December 2016, of which around 20 are trading companies. The Indian Mercantile Association is the sole Indian community association in the country. About 4000 Indian troops served in the United Nations Mission in Sierra Leone (UNAMSIL) from January 2000 to January 2001. Foreign Aid

Context: Japan has been hit hard by one of the worst storm in decades – Typhoon Hagibis – which battered into eight prefectures across Japan, with wind speeds of up to 225km/h (140mph). About the Typhoon A typhoon is a mature tropical cyclone that is develops between 180° and 100°E in the Northern Hemisphere which is referred to as the Northwestern Pacific Basin and is the most active tropical cyclone basin on Earth, accounting for almost 1/3rd of the world’s annual tropical cyclones.

Typhoon Hagibis was a large and powerful tropical cyclone that was considered to be the most devastating typhoon to hit the Kantō region of Japan since Typhoon Ida in 1958.  Like any other tropical cyclone, there are a few major requirements for typhoon formation and development. These includes:

Classification of Tropical Cyclones: The criteria followed by Meteorological Department of India (IMD) to classify the low pressure systems in the Bay of Bengal and in the Arabian Sea as adopted by World Meteorological Organisation (WMO) are as under:

Context: As per the data for the “Quick Estimates of Index of Industrial Production” released by the Ministry of Statistics, India’s industrial sector production contracted by 1.1% in August when compared to the production in the same month in 2018.

What is Index of Industrial Production (IIP)? It is an index that shows the growth rates in different industry groups of the economy in a stipulated period of time. It is computed and published by the Central Statistical Organization (CSO) on a monthly basis. Currently, IIP figures are calculated considering 2011-12 as base year. Besides the new base year, different sectors have been amended based on the National Industrial Classification (NIC), 2008. Major changes in the coverage of the new series of IIP include:

There are two major ways in which IIP data can be viewed:

Context: As the Right to Information marks its 14th anniversary, a Report Card has been issued that analyses its performance and put forward certain findings. The ‘Report Card on the Performance of Information Commissions in India’ was prepared by the Satark Nagrik Sangathan and the Centre for Equity Studies. The organizations who prepared this report card, analyzed information from 22 commissions, which disposed of almost 1.17 lakh cases between January 2018 and March 2019. Key findings Government officials face hardly any punishment for violating the law by denying applicants the legitimate information sought by them. The State and the Central Information Commissions, which are generally considered the court of appeal under the Act, has failed to impose penalties in about 97% of the cases where violations took place in 2018-19. The study also found that the State Commissions of Sikkim, Mizoram, Tamil Nadu and Tripura have not imposed any penalties in any of the cases at all. It was further noted that there were 2.18 lakh cases which are pending with the commission in March 2019. As of October 2019, the Central Information Commission alone had over 33,000 pending cases and any new appeal would have to wait more than 18 months for resolution. About Right to Information Act Right to Information (RTI) is act of the Parliament of India that  provide for setting out the practical regime of the right to information for citizens. It replaced the erstwhile Freedom of information Act, 2002.  As per the provisions of the Act, any Indian citizen may request information from a “public authority” (a body of Government or “instrumentality of State”) which is required to reply expeditiously or within 30 days. The Right to Information (RTI) law was passed by Parliament on 15 June 2005 and came fully into force on 12 October 2005. The organisation called Mazdoor Kisan Shakti Sangathan was instrumental in the passage of RTI Act in India with Aruna Roy being the mastermind behind the RTI Act 2005. Further, the authorities under RTI Act 2005 are called quasi-judicial authorities. RTI relaxes the information disclosure in India which was restricted by the Official Secrets Act 1923 and various other special laws. The most recent amendment in the Act which was passed on 25th July 2019 as The Right to Information Act 2019 had been criticized as hampering the independence of the information commissions because it modified the terms and conditions of service of the CIC and Information Commissioners at the centre and in states.

Context: World Wide Fund for Nature-India in collaboration with Uttar Pradesh Forest Department has began its annual Ganges river dolphin census in Bijnor, Uttar Pradesh. The census is planned to be conducted along the 250 kilometers long riverine stretch of Upper Ganga between Hastinapur Wildlife Sanctuary and Narora Ramsar site. 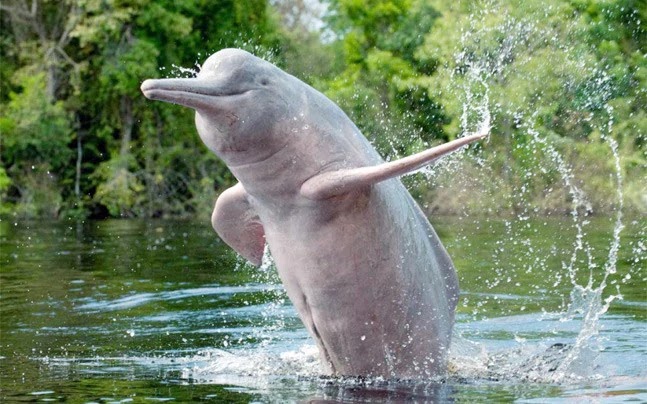 This year a new technique known as the Tandem Boat Survey Method has been adopted, unlike the previous year when direct counting method was used. In this method of survey, the officials use two inflated boats which move in tandem to count the dolphins. After the data is collected, the final count is arrived with the help of a number of statistical tools available for the purpose. This method of counting the river dolphins was developed by the renowned river and marine ecologist Gill Braulik. This method provides a more accurate count of the endangered species. About Ganges River Dophin It is among the four ‘obligate’ freshwater dolphins in the world. Its presence indicates the health of the riverine ecosystem. Owing to the sound it makes during breathing, it is also known as ‘SUSU’. These dophins, being a mammal, have to come to the surface to breathe. Further, it is interesting to note that these are also known as the Blind Dolphins because it does not possess a crystalline eye lens and uses echolocation (also called bio sonar, is the biological sonar used by several species of animal) in order to navigate and hunt.

Eliud Kipchoge from Kenya has became the first human to complete the marathon, a distance of 42.195 kilometers, in a time of less than 2 hours in Vienna, the capital city of Austria. Ineos 1:59 Challenge was a successful 2019 project to break the 2 hour mark for the marathon distance. The event featuring Kenyan athlete Eliud Kipchoge and sponsored by Ineos, a multinational chemicals company, and was held in Austria, on 12th October 2019. Kipchoge’s time of 1 hour, 59 minutes and 40 seconds, however, won’t be entered into the records book because this was a staged time-trial. Thus, the Kipchoge’s own world record of 2 hours, 1 minute and 39 seconds at the Berlin Marathon in September 2018, will remain the fastest time run by a man in a marathon.

The 10th edition of Rashtriya Sanskriti Mahotsav is recently organized by the Ministry of Culture, Government of India under the Ek Bharat Shrestha Bharat initiative in Madhya Pradesh from 14th to 21st October 2019. The Mahotsav was conceived by the Ministry of Culture in the year 2015. Its major objective is to showcase the rich cultural heritage of the country in all demensions, viz Handicrafts, Cuisine, Painting, Sculpture, Photography, Documentation and Performing Arts-Folk, Tribal, Contemporary and Classical-all in one place. So far, Ministry of Culture has organized 9 Rashtriya Sanskriti Mahotsav (RSM) – two each in Karnataka and Delhi, one each in Uttar Pradesh, RSM North East,  Gujarat, Madhya Pradesh and Uttarakhand.

It refers to an emerging international trend, in which someone picks up trash while jogging or brisk walking as a way of cleaning up litter while taking care of fitness. This trend was started by the Erik Ahlstrom from Sweden in 2016 which later turned into an international movement that involved both fitness and environmental enthusiasts. Why in News? During his morning walk on a beach in Mamallapuram, PM Modi was seen picking up plastic litter bottles and other items. He further announced in a tweet, ‘Plogging at a beach in Mamallapuram. It lasted for 30 minutes’.

In India, the govt. organized the Fit India Plog Run on 2nd October 2019, as part of the Fit India Movement which was launched by PM Modi on 29th August 2019.

It is the first tailor-made treatment for a single patient. The drug, Milasen, is believed to be the first ‘custom’ treatment for a genetic disease. The drug is  being used to treat a girl with a rare form of genetic disease. It is name Milasen, after the only patient who will ever take it: Mila Makovec, who is suffering from a form of Batten disease. Batten disease is a rare, fatal and inherited disorder that affects the retina and the central nervous system(CNS). It is caused by mutations in the CLN7 protein and is recessive i.e., the patient inherits two mutated genes, one from each parent. It is to be noted that the Milasen is not suited for the treatment of other patients with Batten disease as its design is customized to the girl’s specific mutation. Significance:  It has opened up the avenues for the development of personalised treatments for people with life-threatening rare diseases and successfully demonstrates the ability to ‘rationally design, test and deploy a novel therapeutic agent for a patient with a rare disease.’