Context: 6th India-China Strategic Economic Dialogue is planned to be held between 7th to 9th September 2019.

SED has since then served as an effective mechanism for boosting the bilateral practical cooperation since December 2010, when the then Chinese President Wen Jiabao visited India. The SED was set up between erstwhile Planning Commission and the National Development and Reform Commission (NDRC). Under the aegis of the SED, senior representatives from both sides come together for enabling ease of doing business and facilitating bilateral trade and investment flows. At the 2nd Strategic Economic Dialogue which took place in November 2012  at New Delhi, constitution of 5 standing Joint Working Groups (JWGs) on Policy Coordination, Infrastructure, Environment, Energy, and High Technology was decided under the SED. Further, 6th Joint Working Group on Pharmaceuticals has also been constituted after the 5th SED.

SED Mechanism is going to be headed this year by NITI Aayog (earlier Planning Commission) on the Indian side and National Development and Reforms Commission (NDRC) on the Chinese side.

The 5th SED was held in Beijing on April 14 2018 right before the informal Wuhan Summit between the leaders of the two countries. Pointing towards the immense potential of bilateral cooperation in the Pharma sector, the Indian side made a representation to constitute a Joint Working Group on Pharmaceuticals in order to progressively address market access and related issues under the SED umbrella. The JWG on Pharmaceuticals has since been constituted and its first Meeting was held in May at Beijing this year.

Context: The 28th edition of India-Thailand Coordinated Patrol (Indo-Thai CORPAT) between the Indian Navy (IN) and the Royal Thai Navy (RTN) is being conducted from 05 – 15 September 2019.

SHIPS INVOLVED: Indian Naval (IN) Ship Kesari and His Majesty’s Thailand Ship (HTMS) Kraburi in addition to Maritime Patrol Aircraft from both the navies are participating in the Exercise. Since 2003, Indian Navy ships and aircraft of Andaman and Nicobar Command have been participating in the biannually held Coordinated Patrol (CORPAT) with the Royal Thai Navy (RTN). The major objectives of the exercise are to ensure effective implementation of United Nations Conventions on Laws of the Sea (UNCLOS) which specify regulations which provides for:

The 28th cycle of Indo-Thai CORPAT will further boost strong bilateral ties and maritime cooperation between India and Thailand.

The Mega Food Park will involve an additional investment of about Rs. 250 crore in 22 food processing units in the park and generate a turnover of about Rs. 14000 crore. It will also provide direct and indirect employment to 50,000 youth and will be benefiting about 1 lakh farmers. It shall also facilitate doubling of farmer’s income by 2022 which has always been the primary agenda of Govt in the field of agriculture.

The Mega Food Park Scheme aims to provide a mechanism to link agricultural production to the market by bringing together farmers, processors and retailers so as to ensure maximizing value addition, minimizing wastage, increasing farmers income and creating employment opportunities specifically in the rural sector. The Mega Food Park Scheme works on a “Cluster based Approach.”  These parks typically consist of supply chain infrastructure including collection centers, central processing centers, cold chain, primary processing center and around 25-30 fully developed plots for entrepreneurs to set up food processing units. The Mega Food Park project is implemented by a Special Purpose Vehicle (SPV) which is a Body Corporate registered under the Companies Act.

A capital grant at the rate of:

Program Management Agency (PMA) is appointed by the Ministry to provide management, capacity building, coordination and monitoring support. A separate amount, to the extent of 5%of the overall grants available, is earmarked for meeting the cost of the above and also other promotional activities by the Ministry.

The process of Release of Grant

There are 16 Mega Food Parks that are currently operational. These are:

Context:  The rarest of the rare surgery or otherwise known as the “AIIMS Delhi Jagga and Balia craniopagus surgery” was sucessfully performed recently. The twins separated through the surgery belongs to Odisha.

This surgery holds importance as it is the India’s only successfully surgery for craniopagus twins. This was the first successful craniopagus conjoined twin separation surgery from India wherein both the children had survived.

What are Craniopagus Twins?

Craniopagus twins are conjoined twins that are fused at the cranium (Part of Skull). This condition occurs in about 10–20 babies in every million births. Worldwide only 10-15 children have survived after surgical separation of this condition in the last 50 years. Among this small group, craniopagus twinning, represents the rarest of congenital abnormalities, accounting for 2–6% of all conjoined twins. These twins are genetically identical and always have the same sex. In craniopagus twins, the union may occur on any portion of the cranium, but does not include either the face. In such twins, the thorax and abdomen are separate and each twin has its own umbilicus and umbilical cord. According to a study, relatively very few craniopagus twins have survived the perinatal period – approx 40% of conjoined twins are stillborn and an additional 33% die within the immediate perinatal period, usually from organ abnormalities and failure.

Context: National Green Tribunal has asked the Centre to prepare a plan for the protection of Great Indian Bustard following the high mortality rate of the bird. 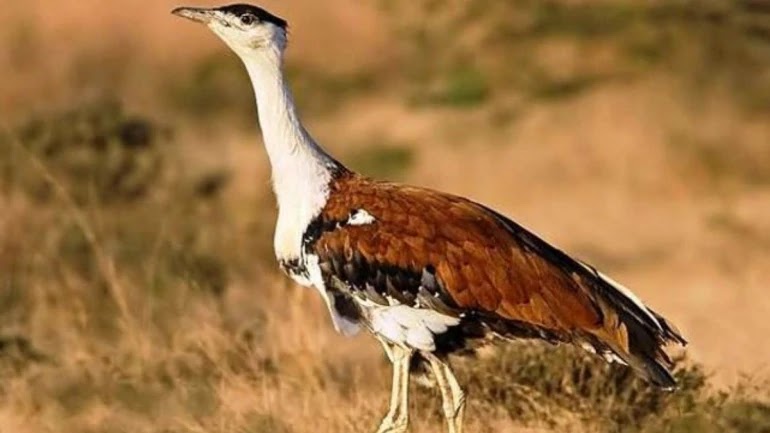 About the Great Indian Bustard

The Great Indian bustard (Ardeotis nigriceps) is a bustard that is found on the Indian subcontinent. It is a large bird with a horizontal body and long bare legs, which gives it an ostrich like appearance, and is among the heaviest of the flying birds.  It is the State Bird of RAJASTHAN.

The bird is listed under the following:

It has also been identified as one of the species for the recovery programme under the Integrated Development of Wildlife Habitats of the Ministry of Environment and Forests, Government of India. In 2011, this species was uplisted from Endangered to Critically Endangered by Birdlife International. The bird is found in Rajasthan, Karnataka, Maharashtra, Madhya Pradesh and Gujarat. Desert National Park, near Jaisalmer and coastal grasslands of the Abdasa and Mandvi talukas of Kutch District of Gujarat support some populations of this species.

PM Modi will be launching National Animal Disease Control Programme for Foot and Mouth Disease and Brucellosis on 11 September 2019 in Mathura. National Artificial Insemination Programme is also planned to be launched on same day.

‘Superbugs: The End of Antibiotics?’

It is an exhibition that has been organised by National Council of Science Museums (NCSM) in collaboration with Science Museum, Group, London, Wellcome (UK) and which is supported by ICMR at the National Science Centre, New Delhi. The exhibition is comprised of 3 major sections i.e., Microscopic, Human and Global.

Indian Railways has been awarded for the best ministry for implementation of Swachhata action plan for 2018-19 by the President of India Shri Ram Nath Kovind. Chhatrapati Shivaji Maharaj Terminus (CST) Mumbai was also presented the best Swachh iconic Place award under the Swachh Bharat Mission initiative. The 3 best stations as per Cleanliness Ranking Survey for 2018 i.e. Jodhpur, Jaipur & Tirupati.

LINE OF CREDIT to Russia

The Strongman of Zimbabwe, Robert Mugabe, who was the first Prime Minister and later the President of Independent Zimbabwe, has died at the age of 95 years. He was the oldest head of the State in the world and the only leader Zimbabweans had known since independence in 1980. Mugabe was conferred as an African liberation hero and champion of racial reconciliation when he first came to power in a nation divided by nearly a century of white colonial rule.