Context: PM Modi launched the PM Kisan Man Dhan Yojana at Ranchi, the Capital of Jharkhand in another major effort to secure the lives of the farmers.

The Scheme will help in securing the lives of 5 Crore Small and Marginal Farmers by providing a minimum pension of Rs 3000 per month, to those who attain 60 years of age. Prime Minister also launched the National Pension Scheme for the Traders and The Self-Employed which aims at providing a minimum assured pension of Rs 3000, to small traders and self -employed after attaining the age of 60 Years. Approximately 3 Crore Small traders would be benefited from the scheme.

What are the other initiatives taken in Jharkhand and across the country?

Apart from the above mentioned scheme, the Prime Minister today launched 462 Ekalavya Model Schools across the country in Tribal Dominated Areas. The schools would focus to provide quality upper primary, secondary and senior secondary level education to students belonging to the ST category in these areas. Multi-Modal Transport Terminal was also launched by Modi at Sahibganj. The waterway will connect Jharkhand not only with the whole country, but also with foreign countries. This terminal will act as an easier medium of access to the tribal communities with the help of which they can connect to the market across the country. New Vidhan Sabha Building of Jharkhand was also inaugurated by PM Modi.

Context: The Delhi-Lucknow Tejas Express will be the first train that will not be operated by the Railways.

What is the story?

The Ministry of Railways (MoR) is planning to allow private players to operate certain trains. As part of its 100-day agenda, the Indian Railway Catering and Tourism Corporation (IRCTC) has been asked to run two trains. The second, the Mumbai-Ahmedabad Tejas Expess, is likely to start operations this December.

How all this will be managed?

In order to make the travel attractive, offers including free travel insurance worth Rs 25 lakh, on-board infotainment services, doorstep baggage collection, local food and no tatkal quota has been provided. IRCTC, a public sector undertaking, will pay the Railways lease and haulage charges for running these trains. However, the loco-pilots, guards and station masters will be recruited from the Railways. IRCTC will managed all the train fares, facilities, on-board advertising, on-board house-keeping, on-board ticket checking and on-board catering.

More about the Trains

Both trains will run 6 days a week and will have an advance reservation period of 60 days with no concessions or railway privilege or duty passes allowed. Only the children who are below 5 years of age will be exempted from fare. IRCTC will have the liberty to decide the fare. Further, there will be no tatkal quota or premium tatkal quota in these trains. These trains will be having only general quota and foreign tourist quota. Also, the services in the train will be provided via trolleys as in done in airlines.

Context: National Intelligence Grid or NATGRID project is planning to link social media accounts to the huge database of records related to immigration entry and exit, banking and telephone details among others. 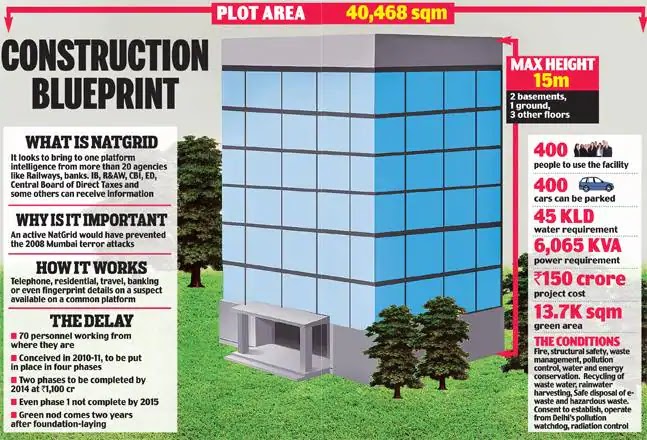 The National Intelligence Grid or NATGRID is the integrated intelligence grid that connects databases of core security agencies of the Government of India to collect comprehensive patterns of intelligence that can be readily accessed by intelligence agencies. It was first proposed in the aftermath of the terrorist attacks on Mumbai in 2008. The project was initially started in 2009 with a budget of Rs 2,800 crore. NATGRID is an online database specifically designed for collecting and combining the scattered pieces of information and putting them on one platform. At least 10 central agencies like Intelligence Bureau (IB), Research and Analysis Wing (R&AW) and others will have access to the data on a secured platform. These 10 user agencies will be linked independently with certain databases that would be procured from 21 providing organisations acting as a source and will include telecom, tax records, bank, immigration, etc. to enable the generation of intelligence inputs.

Context: Astronomers have for the first time discovered water in the atmosphere of an exoplanet with Earth-like temperatures that could support life as we know it.

The planet named K2-18b, which is 8 times the mass of Earth, is now the only planet that is orbiting a star outside the Solar System, or ‘exoplanet’, known to have both water and temperatures that could be potentially habitable The planet is orbiting the cool dwarf star K2-18, which is about 110 light years from Earth located in the Leo constellation.  The team of researchers made use of the archived data from 2016 and 2017 that was captured by the ESA/NASA Hubble Space Telescope and developed open-source algorithms to analyse the starlight filtered through K2-18b’s atmosphere.

What is special about this discovery?

Of the more than 4,000 exoplanets that has been detected till date, this is the first known to combine a rocky surface and an atmosphere with water. Generally, most exoplanets with atmospheres are giant balls of gas, and the handful of rocky planets for which data is available seem to have no atmosphere at all. Even if they did, most Earth-like planets are really far from their stars to have liquid water or so close that any water has evaporated. By comparison, the percentage of water vapour in Earth’s atmosphere varies between 0.2% above the poles, and up to 4% in the tropics. There was also evidence of hydrogen and helium as well.

Context: Following provided is a list of GI Tags that has been given in 2019 till now.

This year the coffee has been awarded the GI Tag for its unique flavour and aroma. Located 2,985 feet above sea level at ARAKU, these coffee are prepared in a distinct style and fashion that made them stand out of the rest.

India is the largest producer of turmeric in the world and among its several varieties of turmeric, Erode Turmeric got the GI Tag in March this year. The tag applies to turmeric that’s grown in Erode district, as well as in Annur and Thondamuthur taluks of Coimbatore district and Kangeyam taluk of Tirupur district.

The first ever temple prasadam to be given the GI Tag, the panchamirtham, made of banana, jaggery, cow ghee, honey, cardamom and dates won this recognition in August this year. It is the main offering to the Dhandayuthapani Swamy, the presiding deity of the Arulmigu Dhandayuthapani Swamy Temple, Palani

Eight hamlets in the Mel Malai region, located at an altitude of over 3,000 metres in Kodaikanal, grow some of the best garlic in the country. The garlic is strong, pungent, and could leave you tearing if you happened to bite into one. Kodaikanal malai poondu (hill garlic) got a GI tag in July this year.

The Palkova is basically a sweet dish made solely out of milk and sugar. Srivilliputhur palkova was awarded a GI tag earlier this week. Made with milk sourced from dairy farmers in the region, the palkova from the temple town of Srivilliputhur tastes different as compared to other regions of the State. Other GI tags distributed in 2019 includes:

This Onam Kerala consumed more than Rs 500 crore worth of alcohol in this Onam. The amount of liquor sold in bars and hotels remained unquantified. Apart from that Bootleg liquor, hooch and moonshine also appropriated a sizeable segment of the market for cheap and hard spirits on holidays.

It is to be noted that Kerala has the highest per capita consumption of alcohol in the country.

India is planning to indigenously develop 60 supercomputers over the next 3 years. These systems will be implemented by the Centre for Development of Advanced Computing (C-DAC) and 6 machines will be installed by the end of 2019. The first supercomputer, Param, in India, was also built by C-DAC. Presently, 2 computers are already functional at IIT-BHU and IIT-Kharagpur (with a capacity of1.6 petaflops), while the 3rd will be assembled at the Indian Institute of Science Education and Research, Pune. It was in 2015, when the government approved the National Supercomputing Mission under which it was planned to have supercomputers in different institutions across the country that will facilitate research involving high-power computing. The plan is to have the total capacity of 70 petaflops and 40-60 supercomputers depending on the location and capacity.

Joint Military Exercise MAITREE-2019 between India and Thailand is planned to be conducted at Foreign Training Node, Umroi (Meghalaya) from 16-29 Sep 2019.  Exercise MAITREE is an annual training event which is being conducted alternatively in Thailand and India since 2006. The joint military exercise will boost the level of defence co-operation between Indian Army (IA) and Royal Thailand Army (RTA) which in turn will further foster defence cooperation and bilateral relations between the two nations.

These are Indian Naval Ships that are operating under the Command of Rear Admiral Suraj Berry, Flag Officer Commanding Eastern Fleet and are the latest, indigenously designed and built multi-role ships of the Indian Navy. The two ships are equipped with a wide array of weapons and sensors, and can carry multi-role helicopters and represent the ‘coming of age’ of India’s warship building capabilities. Recently, these ships made a port call at Kota Kinabalu, Malaysia as part of Indian Navy’s Overseas Deployment to South East Asia and Western Pacific and would be participating in the bilateral exercise Samudra Laksamana. RUDRASHILA It is a white water Rafting Expedition has been organised to commemorate the 75th Raising day of the Kalidhar Battalion. The name ‘Rudrashila’ derives from the famed Rudraprayag tributary of the Ganges River in the Mountains of Uttarakhand. ‘Kalidhar Batttalion‘ was raised on 01 November 1943 and has participated in all major operations of the Indian Army including two overseas assignments in Korea in 1953 and UN peacekeeping Mission in Congo in 2005-06. READ MORE